There are various reasons to join Langoik. They are as follows :

I want to pursue my career in Germany. Will you help me in it ?

Ofcourse ! We have all the information about German universities; when to apply, where to apply, how to apply. Moreover we have the database of the funding programmes, such that funds should not turn out to be a hurdle for you. We would be more than happy to see our students making their career in Germany.

What is the procedure of taking admission ?

You just have to submit the registration form and submit it in our office and then you can start with your classes. Fill up the enquiry form for more details.

Do you give trial/demo class ?

Are there any charges for trial/demo class ?

No, there are no charges for trial/demo class.

I have done certificate course from an university, is it equal to A1? If Yes, then can I join A2 batch instead of doing A1 ?

My English is not good, can I still manage to learn German ?

Undoubtedly yes, because at Langoik we not only explain the concepts in English, but also in Hindi.

Are classes taken in German ?

Yes, initially we explain the concepts in English or in Hindi. After having basic understanding of German language, we take the classes in German, such that we have better learning outcomes.

Knowing a foreign language is always considered as an add-on to the list of one’s qualities. Associating oneself with more than one language heightens employment opportunities in various career options such as business, government, law, health care and medicine, technology, teaching, the military, social service, communications, and marketing, and Langoik is the best solution for it.

As per the calculations of MIT Economist, Albert Saiz German learns may have an accumulated bonus earning of 128,000 USD. 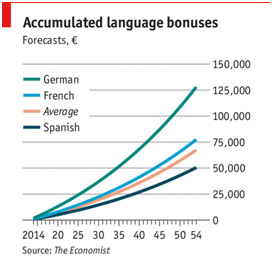 In the emerging markets of Eastern Europe, Germany’s is the third-largest economy in the world and is the highest exporter relative to its population. The productivity of German workers is the highest of any European country. So in such a scenario, knowing German can be of an added advantage to explore the business sector as a career opportunity. It is easier for highly skilled people to immigrate to Germany, if they are well versed with the German language.

The first ideology behind choosing the right university is that they facilitate higher chances of placement. Some renowned German Universities have been ranked in the top 100 list of universities that boost Global Employability. The list is compiled by Trendence, a German polling and research institute along with a French human resources consulting group of Emerging Associates.

Every year more than 20000+ scholarships are introduced for the researchers and students, who are seeking their career in Germany. So if you aiming to study in German university then you can apply for a scholarship.

(5) Tuition Fees is minimal in Germany :

This is really something really remarkable about education system of Germany. It is very helpful for students who cannot afford studying in expensive institutes. These universities provide education of international standards and that too within affordable fees.

(6) Lots of available options regarding courses and institutes :

There are many good and renowned universities and Germany. And, each university has several different institutes under it that offer wide range of courses. There are more than 400 courses and institutes too choose from.

Students get the chance to build career in so many different domains and disciplines.

Dual studies, is a concept where students also get the chance to work, while they are studying. This is helpful for students mainly in two ways

(b) It helps them in earning some money.

My question is not mentioned here ?

If there is anything which hasn’t been answered here, then please feel free to call at 9958405787 or fill the enquiry form we will get back to you.